Leviathan and his Abyss


There has been much conjecture over the identity found within the Bible who is named Leviathan. The Organization of "Jehovah's Witnesses"  has defined it as an Egyptian crocodile. Some have even explained Leviathan as "Nellie" the "loch ness Monster".
(http://en.wikipedia.org/wiki/Loch_Ness_Monster)
According to the "Watchtower" (http://wol.jw.org/en/wol/d/r1/lp-e/1200002728);
"The description of “Leviathan” at Job 41:1-34 aptly fits the crocodile, and the “sea” of Job 41 verse 31 may refer to a river such as the Nile or another body of fresh water. It should be noted, however, that some crocodiles, as the Nile crocodiles (Crocodylus niloticus), are found along the seacoast and at times go out into the sea some distance from land."

Is Leviathan a crocodile? Let's look to the scriptures to see what God's Word tells us about Leviathan.

At Isa.27:1 we learn that this cold-blooded reptile is going to be "punished" by the will of God, that it is a "serpent", and that this "monster" belongs to the "sea" (Isa.57:20).
We must ask ourselves...
If Leviathan is one of the natural creatures of the earth; why does God deem it worthy of punishment? He Himself declared all such creatures, "very good" (Gen.1:20,21).
Is Leviathan a natural creature at all?

I don't know of any crocodiles,
nor any other natural creature that has more than one head.
As we have seen so far, the correct and scriptural  interpretation of Leviathan, must include that the creature is deserving of punishment, and is to have its "heads" "crushed" by the will of God;
And that Leviathan has multiple heads.
As ferocious as crocodiles are, they only have, one head..... 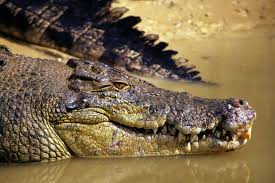 Since the description of Leviathan at Isa.27:1 calls Leviathan a "serpent"; this reminds us of Satan (Rev.20:2).
But if "Leviathan" (Hebrew לִוְיָתָן, meaning: Crooked, twisted, perverse) really is Satan;
Then Satan himself must possess "crooked and twisted" traits, in order for this alternate name to suit him.

a. To bring into being; give rise to: generate a discussion.
b. To produce as a result of a chemical or physical process: generate heat.
2. To engender (offspring); procreate.
[Latin generre, genert-, to produce, from genus, gener-, birth; see gen- in Indo-European roots.] 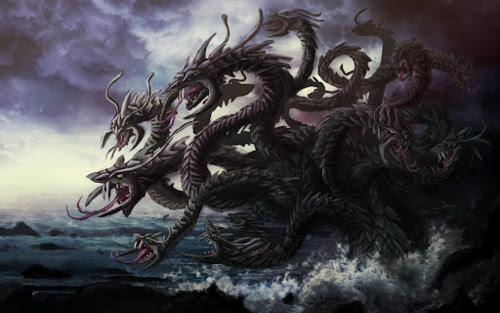 below are my personal notes, and are not a part of what is ready for publishing.
There is some interesting commentary from various sources included.
I thought the references might help to clarify some things.


Attention has been called elsewhere to the meagerness, in the matter of detail, of Old Testament demonology (see DEMON, DEMONOLOGY; COMMUNION WITH DEMONS).  We have the following set of items in which such traces have been discovered: "Rahab" (rachabh--Rachabh " : Meaning " to be wide or spacious "rachabh, "spacious place". Hence the meanings: (1) primeval waters; (2) the waters beneath the earth; (3) the upper seas and rivers; (4) the abode of the dead, limbo; (5) the abode of the evil spirits, hell. The last two meanings are the only ones found in the New Testament.),

see 'Ab. Zarah 17a), and the names of her two daughters have in all probability, as familiar names of dreaded diseases, been dropped (originally the death-dealing sting of the midsummer sun-god Nergal (see Roscher, l.c. iii. 257), and Keṭeb ("smiter"), the deadly hot wind (Deut. xxxii. 24; Isa. xxviii. 2; A. V. "destruction," "destroying"), are demons, the one walking in darkness, the other storming along in midday (A. V. "that wasteth at noonday")

A review of these passages brings certain very interesting facts to light.

The references are few in number. Rahab is mentioned 3 times; Tannin (in this connection), once; Leviathan, 5 times; the serpent in the sea, once; Seirim, 5 times (twice with references to idols); Alukah, once; Azazel, 3 times in one chapter and in the same connection; Lilith, once (Night Monster).
The term se`ir is in literal use for "he-goat" (Numbers 15:24, et al.) and is doubtful throughout. Ewald translates it "he-goat" in Isaiah 34:14 and "Satyr" in 13:21. It means literally "shaggy monster" (Vulgate, pilosus). We do not hesitate on the basis of the evidence to erase "Alukah" (Proverbs 30:15, the Revised Version (British and American) "horse-leech," by some translated "vampire") and "Azazel" (Leviticus 16:8, etc.), interpreted as a "demon of the desert," from the list of mythological words altogether. As ripe a scholar as Perowne ("Proverbs," Cambridge Bible) combats the idea of vampire, and Kellogg ("Leviticus," Expositor's Bible, in the place cited.) has simply put to rout the mythological-demonic interpretation of Azazel. According to The Expositior's Bible Commentary, Azazel is the Hebrew word for scapegoat....a goat to go away.
Even in the case of lilith the derivation is obscure, and the objections urged against the demonic idea by Alexander have not altogether lost their force (see Commentary on Isaiah, in the place cited.). There is a close balance of probabilities in one direction or the other.

Whether the Hebrew name Lilith is a Biblical name is a matter of debate. The word

occurs only once in the Bible, in a sermon by Isaiah to warn the nations (and Edom specifically) what their countries were going to look like if they didn't shape up:
"And the dessert creatures (demons) shall meet with the wolves (false prophets Rev.16:13,14,15,16). The hairy goat also shall cry to its kind. Yes,

Posted by Pearl Doxsey at 8:09 AM No comments:

Pearl Doxsey
DIRECTORY OF ARTICLES: IN MY PROFILE: Click on my name